Why Invest in Rio de Janeiro?

Rio de Janeiro. Cidade Maravilioso…The Marvelous City. A fabled City famous for beaches, skimpy bikinis, Carnaval, and romance. Now famous for hosting the finals of the 2014 FIFA World Cup Futbol matches at the famed Maracana Stadium, the 2016 Olympics and Paralympics, and the worlds biggest oil and gas find in 35 years. But what and who is Rio de Janeiro and how could investing there benefit you? 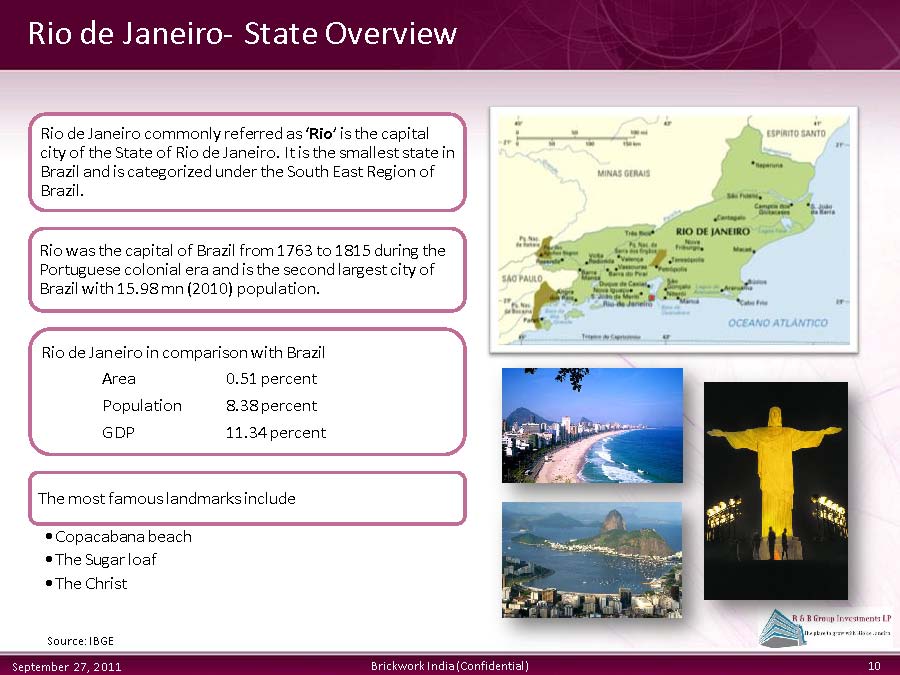 Brazil is South Americas most influential country, an economic giant and one of the world’s biggest democracies. It has a geographic area of 8,515,000 sq km. It is divided into 5 geographic regions, 26 states plus 1 Federal district and 5,565 cities. It has an expected population of 203.43 million (July 2011). 87% of its total population (2010) is considered as urban population. Brazil experienced two quarters of recession, as global demand for its commodity-based exports dwindled and external credit dried up. However, Brazil was one of the first emerging markets to begin a recovery. Consumer and investor confidence revived and GDP growth (7.5% in 2010) returned to positive in 2010, boosted by an export recovery. 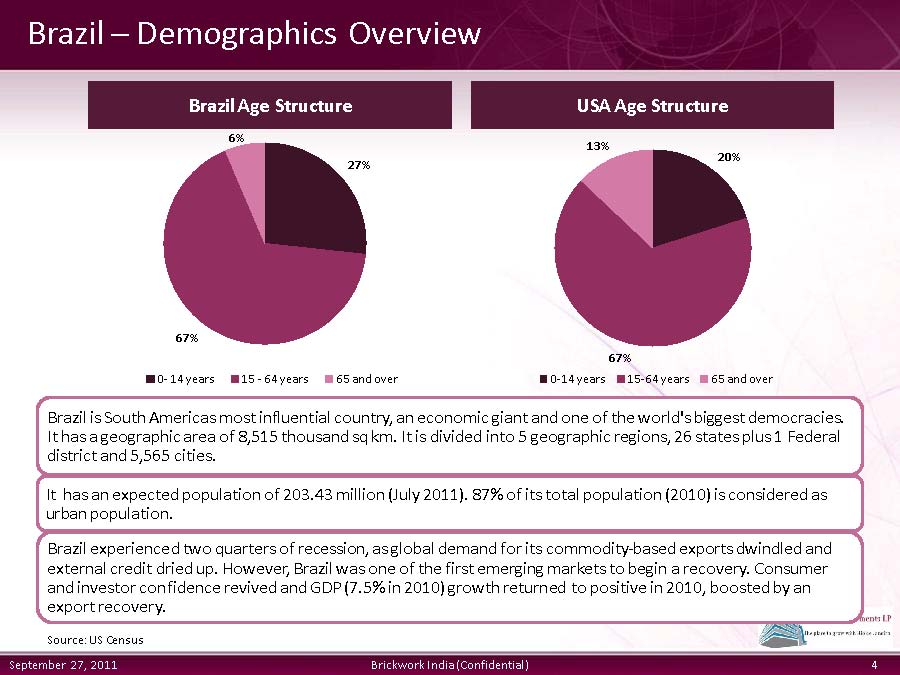 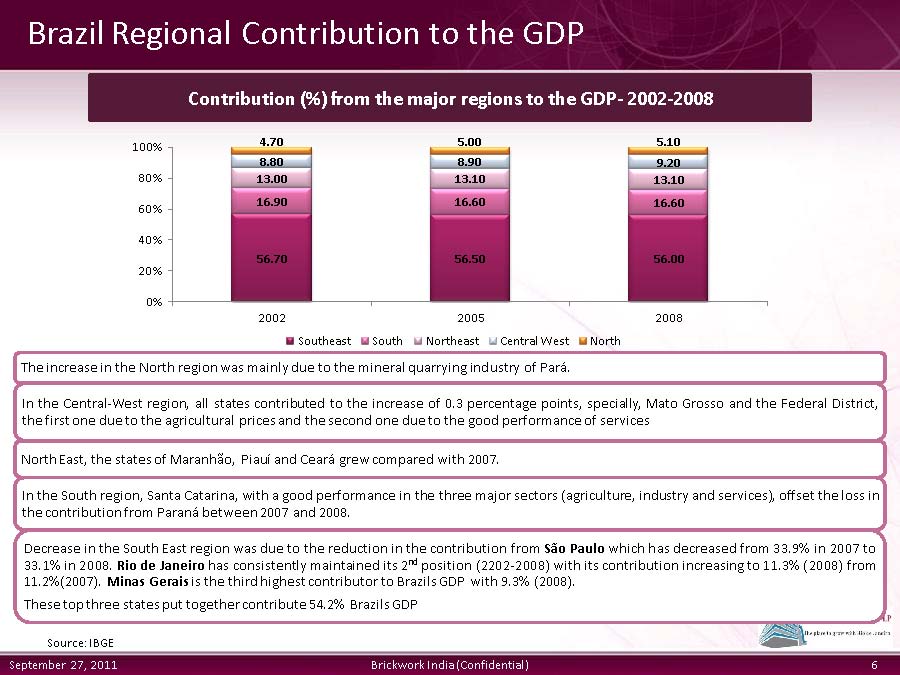 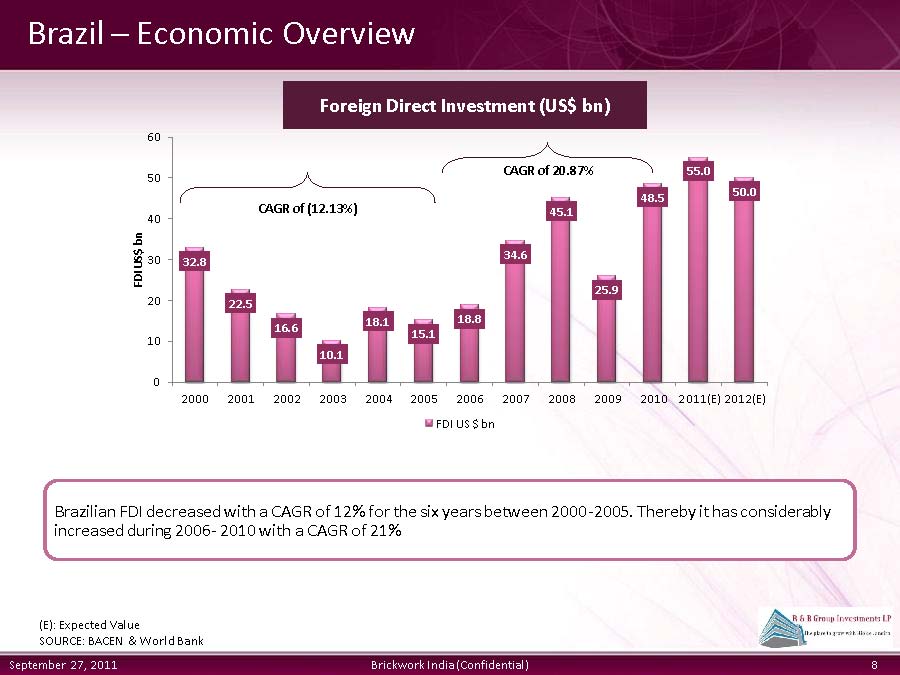 With the strong growth of the Brazilian economy in the last decade, approximately 30 million people have moved upwards into the middle class whose disposable income increased by 67%. The administration of Luiz Inacio Lula da Silva alone is credited with moving 21 million people out of poverty with programs such as “Bolsa Familia” which provided a R$110 stipend monthly to families who sent there kids to public school. This created a burgeoning new market for such things as housing and durable goods. 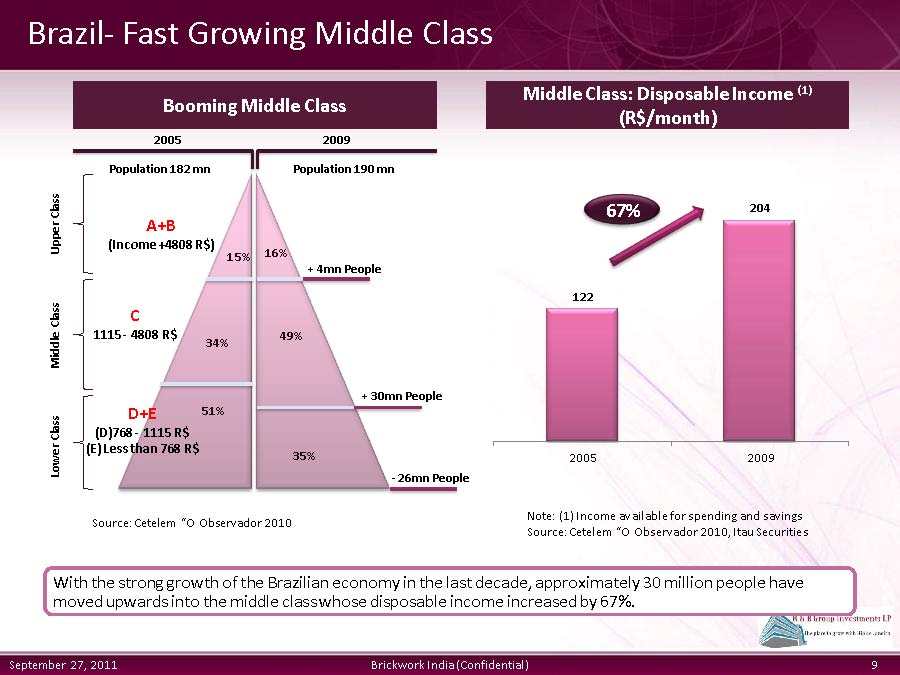 Rio de Janeiro has a population of 15.98 people, most of whom reside in the urban area bounded by the Atlantic Ocean, Guanabara Bay, and the “Brazilian Shield” or Grand Escarpment, the raised plateau that characterizes the Brazilian interior. So there is a finite amount of land available, as small cities cannot develop between the big cities, and each city must develop it’s own infrastructure, not being able to take advantage of economies of scale. This limited land mass also gives rise to inflation of property values as demand for said property increases. 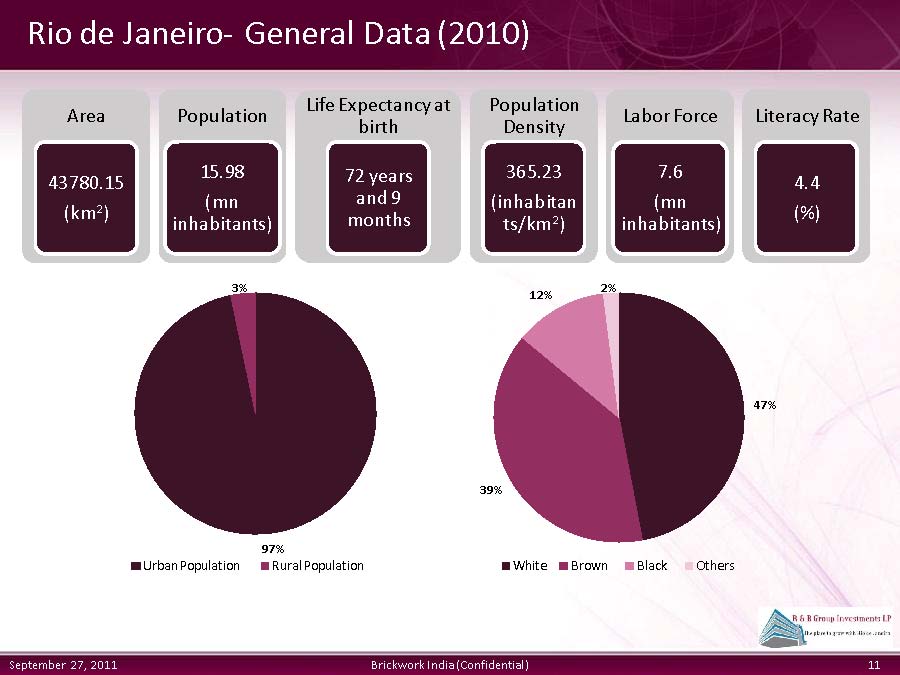 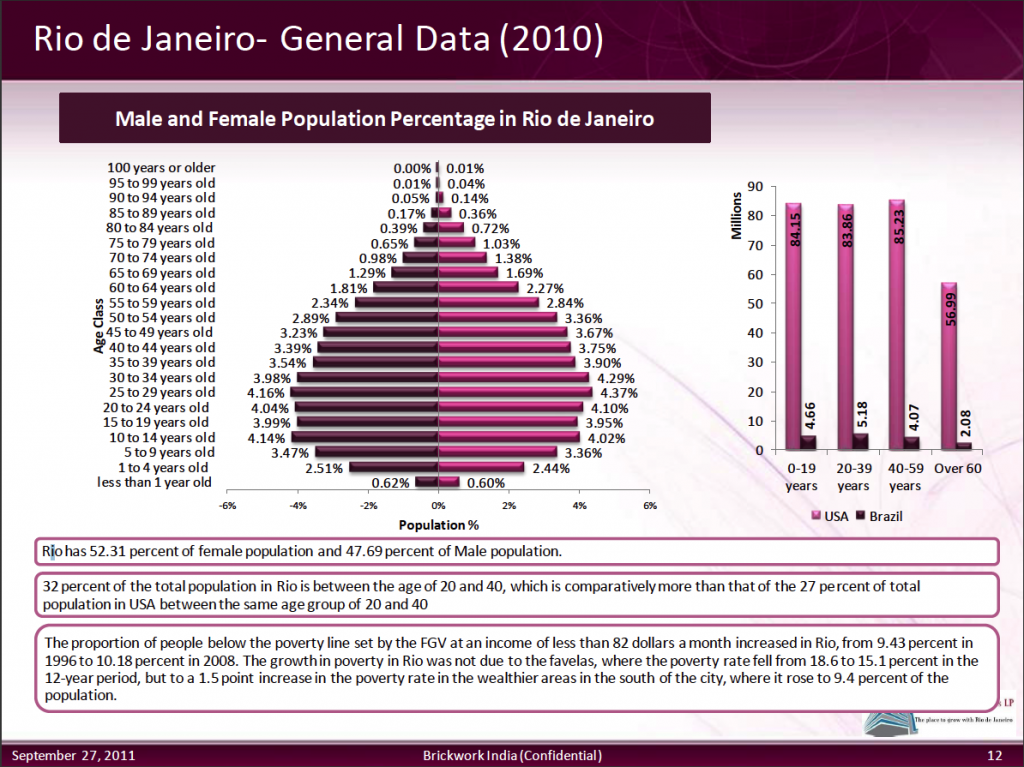 So demographically Brazil is behind the United States in reaching it’s peak spending capacity. So a large portion of the Brazilian GDP is concentrated among this group that is beginning to spend on housing. 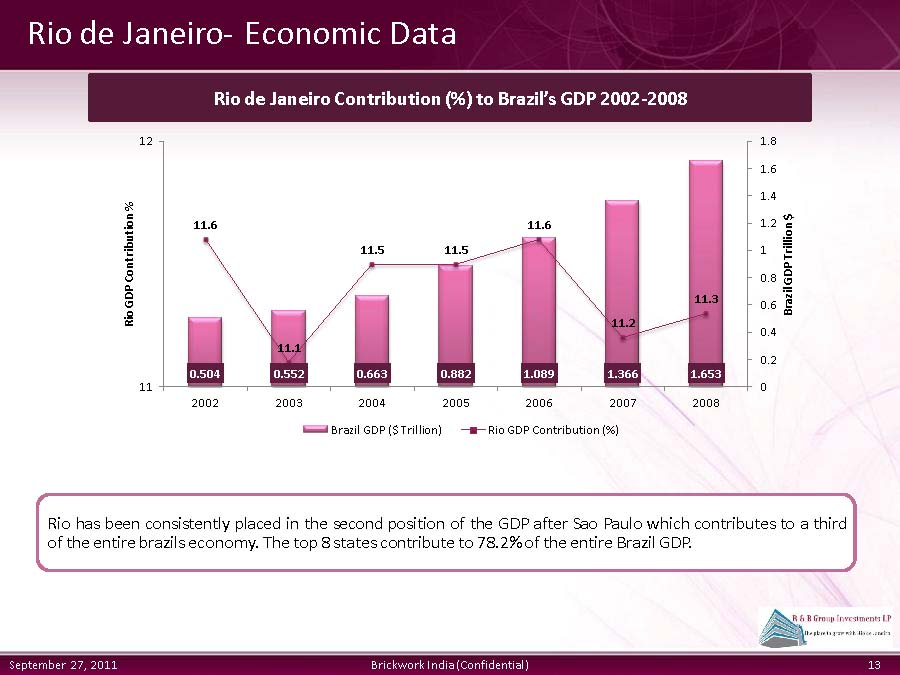 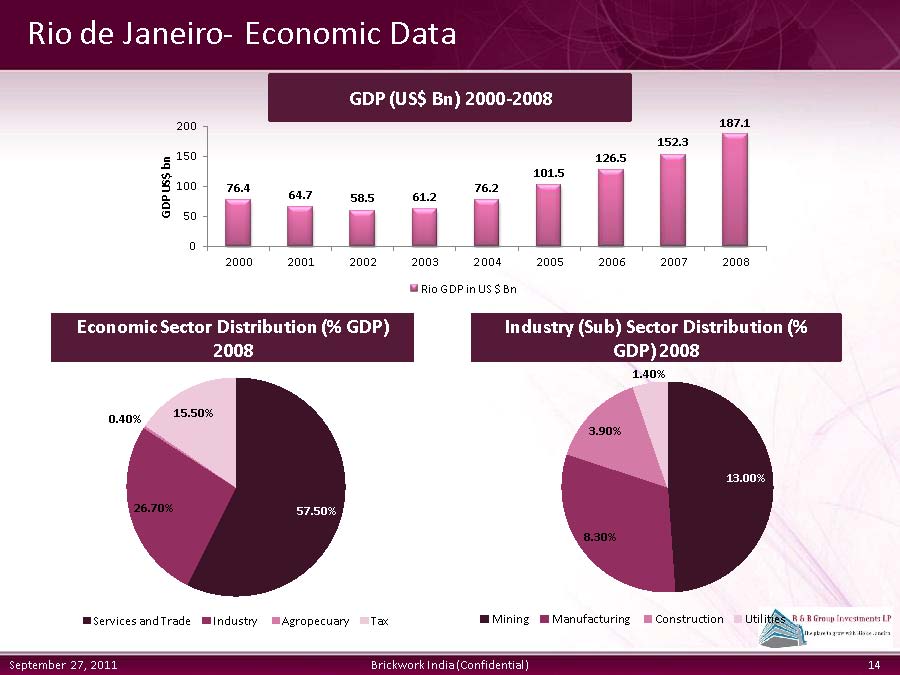 So with the combination of strong economic growth, the movement of people to the middle class, the high visibility afforded by world class events and a huge oil and gas find, the demand for quality housing in Rio de Janeiro is increasing exponentially. Add to that the demand imposed by foreign investors, and Brazilian’s newly acquired access to the mortgage market, and you have a potential for real investment gains. 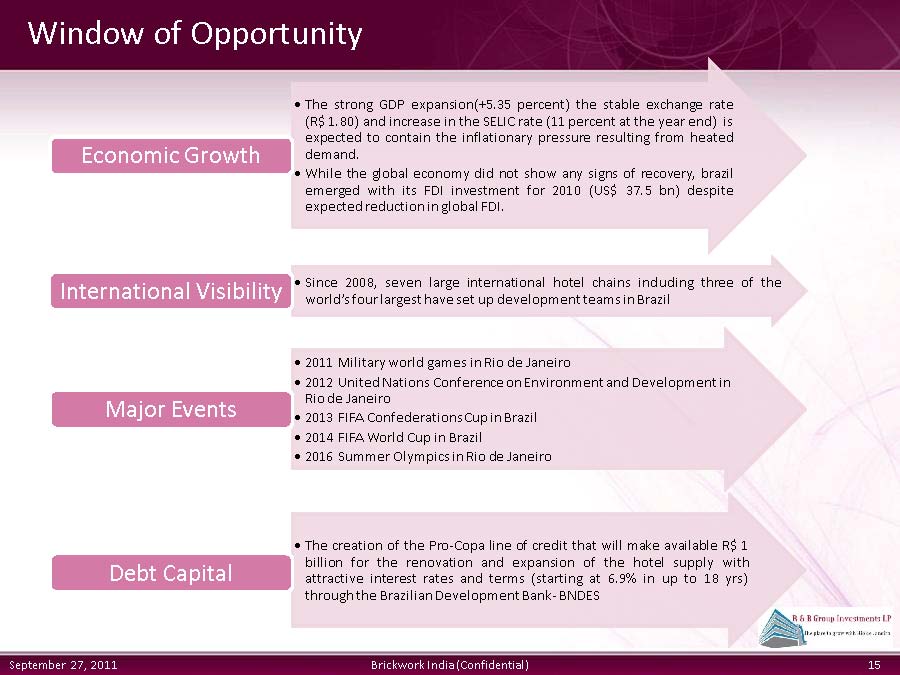 Real Estate values have skyrocketed 33.5% in Rio de Janeiro in the last 12 months. 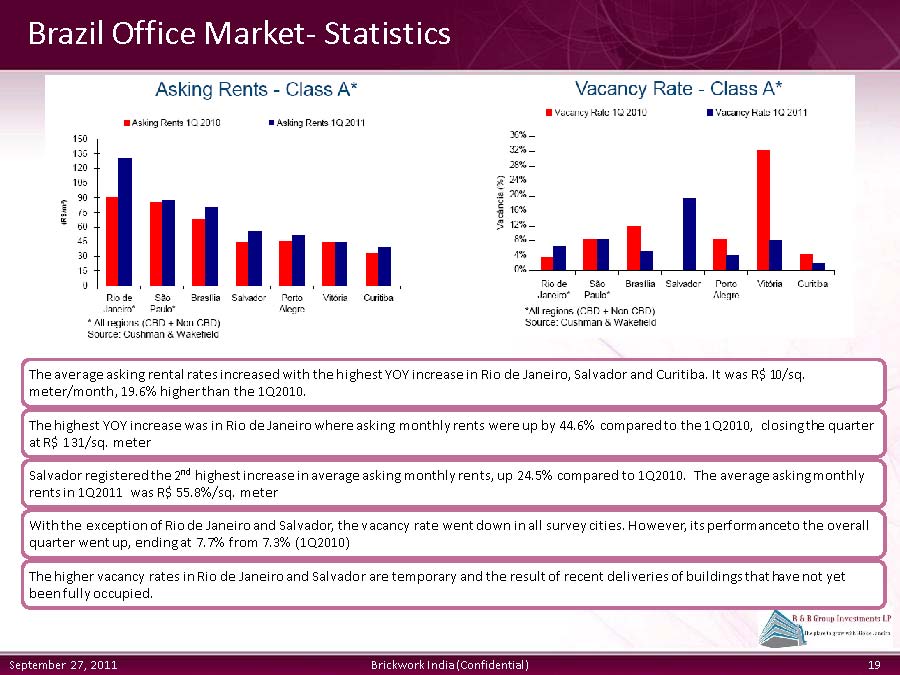 There is a shortage of class A space being made worse by the influx of foreign oil companies, and their suppliers, and the demand for research space in the high tech oil field sector. 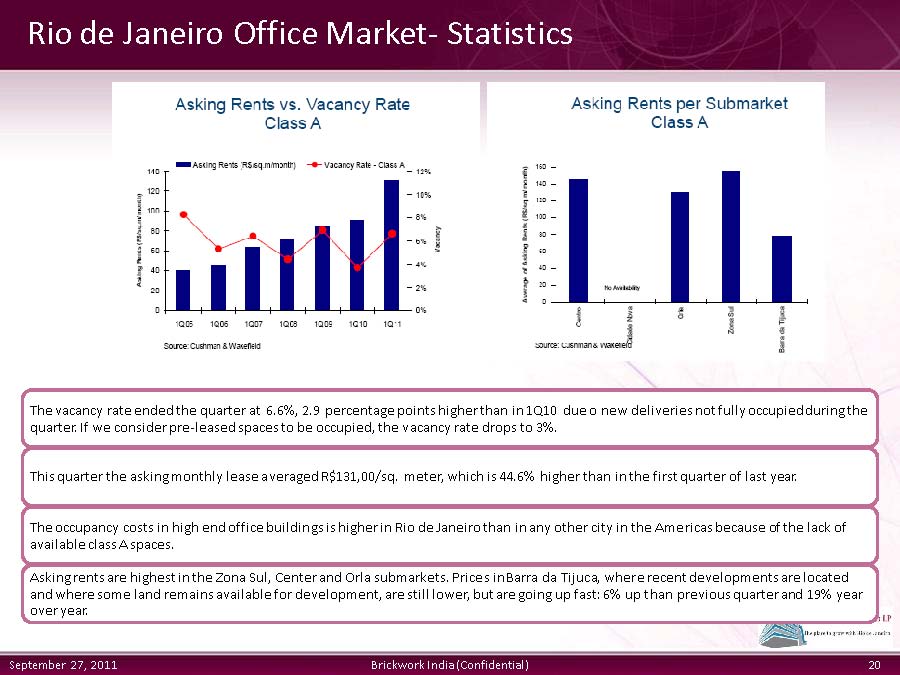 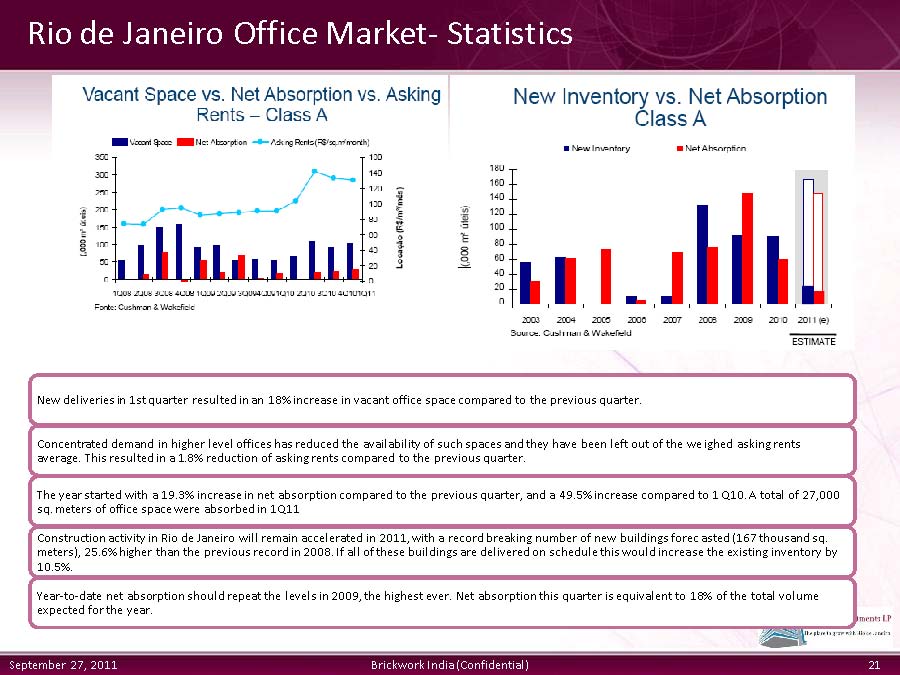 The average asking prices of new apartments across brazil soared by 24.7% in April 2011. In Ipanema, Rio de Janeiro’s most expensive district, the average price of new properties rose 36% YOY to R$ 13,031 per sq. meter while the price of existing properties increased by 25% YOY to R$ 12,134 per sq. meter. This was due in large part to the demand by speculative foreign investors and the increased demand due to a more readily available mortgage market. A 7.48% increase in tourism from 2009, and an increase in foreign workers to supply the oil boom is creating a shortage of hotel rooms and apartment rental units alike. Rumor has it that the government of Rio de Janeiro is considering mooring cruise ships in Botafogo Bay to handle the influx of tourism due to the Olympics. In fact, the Brazilian Olympic Committee actual stated in it’s application package to the IOC that it will use  “…cruise ships and condominium apartments to over come a possible shortage in the number of hotel rooms.”

With this in mind, and looking at a 10% growth rate in hotel room demand over the last 5 years, Brazil is poised to spend $11 billion US on hotel infrastructure. With per room revenue increasing 8.4% since 2004. 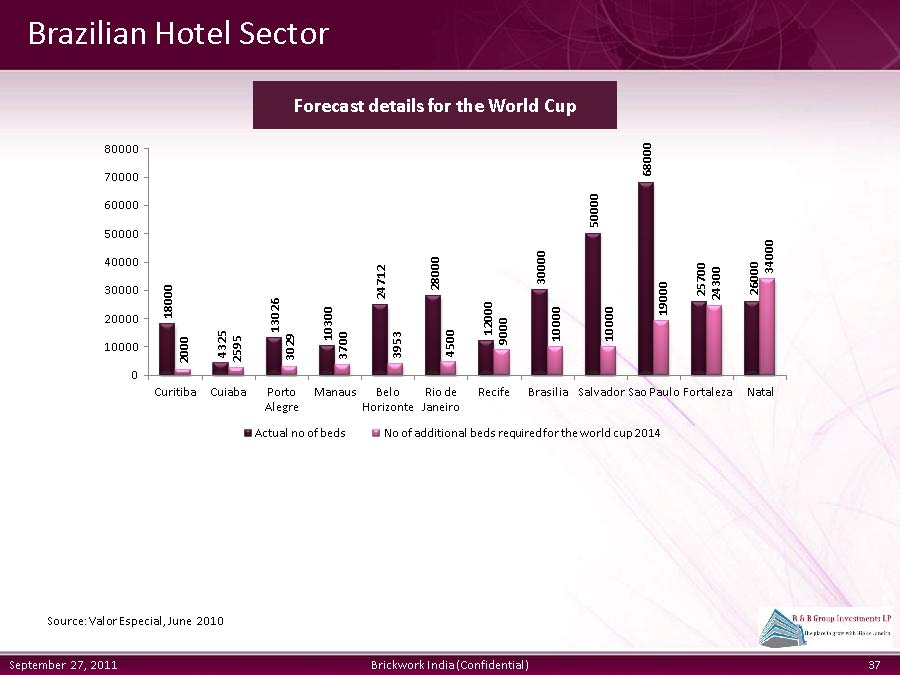 So the upside potential in real estate investing is definitely there. Housing all of the income tourists for these two world class sporting events will be a huge challenge for Rio de Janeiro. Besides that demand, don’t forget about the burgeoning middle class that is searching for better housing due to the vibrant economy and availability of mortgage credit.

Also, take a look at the weakness of the US dollar world wide. Since December of 2008 the value of the US Dollar against the Real has fallen 30% to June of this year. With the United States Government position of a weak dollar, and the current economic malaise gripping the United States, further depreciation is inevitable.

This depreciation makes investment in Rio de Janeiro even more attractive as your money will be invested in a currency that is holding it’s value, or appreciating in value, while the Dollar is falling. By investing in real estate you can invest in the Brazilian currency other than thru an ETF or the FOREX market. With rental incomes averaging 8% on investment, and values appreciating due to the aforementioned demand, you could protect the value of your money while enjoying the benefits of the investment. When you elect to repatriate your money there is every likely hood that the exchange rate will be favorable for a return profit.

We will be further exploring the exciting world or investing in real estate in Rio de Janeiro. With it’s increasing tourism, economic development, burgeoning middle class, mortgage reforms and availability, and increasing foreign investment Brazil is definitely a place to consider. At Miriam’s Apartment, and through RBG Empreedimentos em Negocios Imobiliarios along with R & B Group Investments, LP, we are here to help. We can help take the fear and uncertainty out of your investment here in Rio de Janeiro.